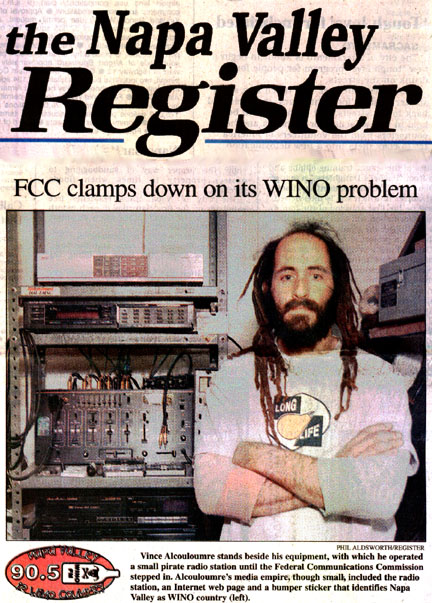 When the agents showed up at 5:30 p.m. Thursday, Alcouloumre, a 34-year-old, dreadlocked auto mechanic, said he knew his six-month experiment in free-form underground radio was over.

"I went on the air and said, 'Thanks, Napa. WINO-FM is going off the air.' It was very surreal," Alcouloumre sald Monday.

Since May, WINO-FM, which had operated out of Alcouloumre's Volkswagen repair shop on River Street, had entertained a growing cadre of Iisteners with all kinds of alternative music, from rock to jazz to things eerily electronic.

Broadcasting at 90.5 FM, WINO managed to stay below the FCC's radar screen and avoid mainstream media attention until last month when The Register interviewed Alcouloumre, but didn't reveal his name or location.

The article was a good thing, winning additional Iisteners for his home-grown station, said Alcouloumre, whose 20-watt station only reached listeners within two or three miles of his auto shop, he said.

What apparently caused his demise was inadvertently letting his broadcasting equipment get out of calibration, which caused signal interference with commercial stations, he said.

Don Schrack, manager of the Napa Valley's KVYN-KVON stations, said he filed a complaint with the FCC early this month after WINO's signal began bleeding into KVYNs at 99.3 FM.

"Our sales people were saying that at the corner of such-and-such they were getting WINO on top of KVYN," Schrack said. We notified the FCC at that point." Alcouloumre's WINO is one of hundreds of unlicensed or pirate radio stations in the United States which use cheap, lowpower equipment to beam a signal over a few square miles.

Although such operations are illegal under federal law, the FCC ignores them unless it receives a formal complaint, which happens whenever a pirate station's signal interferes with a licensed station or disrupts an airport's air control system, David Fiske, an FCC spokesman in Washington, said Monday.

Federal law requires people who want to start radio stations to go through a long, expensive licensing process. There is no provision for licensing stations such as Alcouloumre's that broadcast under 100 watts.

Alcouloumre, whose primary passions until last May had been Volkswagens and dune buggy racing, apologized for disrupting the KVYN signal. He said the "over-modulation" problem lasted for at least four days while he was out of town.

"The FCC fears that people without the right equipment could cause interference with existing stations," said Alcouloumre. We did exactly what their fear is."

The solution, he said, is for the FCC to license small stations such as his to make sure they are equipped to operate without causing problems.

Except for the interference issue, Alcouloumre said "not one person has told me there was a reason I shouldn't be operating. Not one. I wasn't hurting anybody."

KVYN-KVON had been willing to tolerate WINO prior to the signal interference, but management believes that all stations should play by the same rules, Schrack said.

Licensed commercial and non-commercial stations have invested lots of money for the right to broadcast, Schrack said. The FCC makes sure that the airwaves, which are owned by the public, are operated to benefit the public, he said.

"When pirate radio stations go on the air, they report to no one," Schrack said.

Alcouloumre, who borrowed the letters "WINO" from an old George Carlin comedy routine, said freedom from advertisers and bureaucracies is what makes low-power stations possible.

"That's what the movement is about - to have a voice for you and your neighbors," said Alcouloumre, who used his station to promote local bands such as Atomic Jones and Poop Deck Pappy and local non-musical arts.

"As soon as you get bigger, you start to homogenize things," he said. "I didn't have to worry about advertisers. I could take risks that regular stations can't."

Established stations never enjoy having a pirate station operating beneath their electronic umbrella, Alcouloumre said. "It's a big business. They begin to feel a threat. They may lose a few listeners, a few dollars," he said.

Alcouloumre said he was willing to shut down after receiving a written warning from the agents. To defy their notice would be to risk up to $75,000 in fines and confiscation of his equipment.

Alcouloumre noted that the agents were both courteous and respectful. They complimented me on my equipment and the quality of the signal," he said.

At the agents' suggestion, Alcouloumre said he will explore ways of getting a FCC permit for his low-power operation. "I want to give them the benefit of the doubt," he said. "I've decided to cooperate with them and see where it goes."

The FCC currently doesn't license "microbroadcasting" operations such as Alcouloumre's, but last week the U.S. District Court in San Francisco made a ruling in the case of another pirate station, Free Radio Berkeley, that could help his cause. The judge refused to shut down the station and ordered the FCC to study freedom-of-speech issues.

Alcouloumre is seeking letters of support to submit to the FCC once he decides on a strategy for taking on the federal bureaucracy.

He is considering other options, such as becoming a cable radio station that uses the Iines of TCI, Napa City's cable TV company, or putting his music out over the Internet using his website: wino.com.

He could be broadcasting over the Internet within several months if he had $10,000 to $15,000 worth of added equipment, Alcouloumre said. "People are wanting to help. I've already had some pieces donated that will cut down that number significantly." he said.

"Obviously, these are all compromises. I'd like to be back on FM," Alcouloumre said.

"My hopes and goals were to build a public forum, an outlet for everybody, mostly on an entertainment level. That's where I'm coming from: local bands, musicians, artists, writers. A place to give it a shot," he said.

"I grew up in this town. People are always complaining there's nothing going on here," he said. "I was trying my best to make something happen."

Back to the WINO news page.